Tips on “Catch and Release” in River Karup.

It's a well-known fact, that one of the subjects in modern day salmon- and sea trout fishing, that really divides anglers into groups of pros and cons, is whether you do, or even should practice "Catch and Release" (C/R) in a river system... or not? This debate is, not surprisingly, also present by the River Karup.

The arguments on whether you like C/R or not, are generally fairly well known. Most of the arguments come from moral or ethically based points of view. It is also given, that no matter what I write on this subject, there will be people not agreeing with my position on the subject. And that’s fine 🙂

But if you’re planning to practice C/R in the river, it is good if you have taken a position on this issue and thought about “how to do” C/R, before visiting River Karup to fish for the beautiful sea trout. C/R clearly works best for both fish and angler, if the angler has full focus on the well-being of the fish, and therefore have considered exactly how to go about C/R, before actually practicing it.

The main purpose of this blog is therefore to bring focus on the possibility to practice C/R in River Karup, and what considerations you should take into account on behalf of the fish, when opting for C/R. 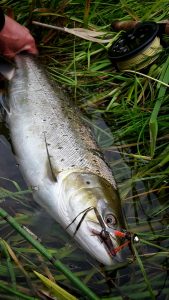 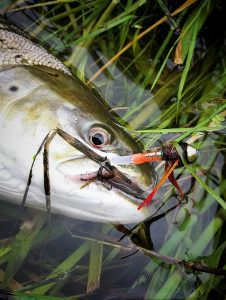 Some thoughts on C/R.

The main goal when fishing the River Karup is to enjoy nature, and maybe catch a fish. If you do catch a sea trout, it’s perfectly okay to take it from the river, in order to make a nice dinner out of it later on.

Gently position the fish, on riverside water plants. This ensures that the fish can still breath, having its gills in contact with water.

There is actually no maximum “bag limit” in River Karup. But seeing as how the fish normally are quite difficult to catch here, the lack of a bag limit is seldom a problem.

However, if you do run into some fantastic fishing, it’s considered “good practice” by the local anglers, and the fishing associations along the river, that you only remove a number of fish from the river, according to what you can consume yourself.

Therefore, it’s also perfectly okay to practice C/R here by the River Karup. Both being used as a general option, or to put into use, if you experience some fantastic river fishing.

Most important, when choosing to practice C/R, is that you make sure the fish has a fair chance of survival. Otherwise, practicing C/R doesn’t make much sense.

Just support the fish head upstream, upon releasing it.

You can see a little video here, with some C/R situations from my own 2018 season in the River Karup.

Where do I stand?

I’m just going to state my own position on this matter, listed up as follows:

And very much so! Obviously, having a nice family dinner, preparing a delicious meal with a nice fish caught in the River Karup, is a highly appreciated event in my private home. The sea trout from the river are “high quality” as eating fish, and I can strongly recommend that you try “smoked” sea trout from the river, in various recipes.

Under the right circumstances, and when I truly believe the fish has an optimal chance of surviving after being caught… then Yes, I do practice C/R.

I like to have a choice! This enables me to make what I think is the right decision, in every single situation by the river. Thereby being able to take the given circumstances into consideration as well, when choosing to either release a fish back to the river, or make a dinner out of it.

The use of C/R as an option, as supposed to it being obligatory.

The fish normally turn to one side, when they take the fly “on the swing”, or they take gently from behind, just nipping the wing (and hook position) of the fly. This usually results in a light external hook set, which later on as a result, gives you the opportunity to decide, whether you wish to keep the fish, or return it back to the river. 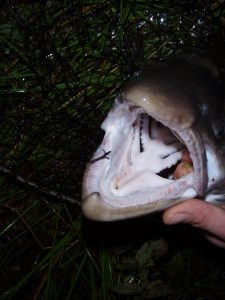 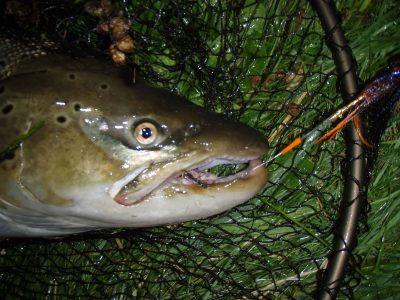 However, on other occasions, the fish can strike the fly rather aggressively, sometimes engulfing the fly completely! This means, that every now and then, you hook a fish in such a way that makes it bleed heavily. This typically occurs with a deep hook set, in the fishes tongue, gills, or back throat areas. 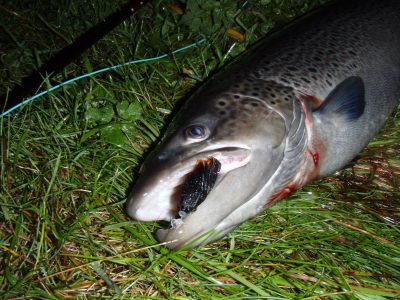 Fly and hook totally engulfed, resulting in a deep and wounding hook set. With blood pumping out of the gills, C/R is not an option. 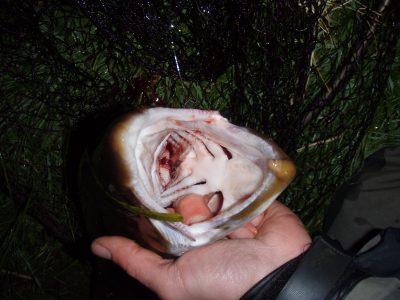 Obviously, with a deep hook set and bleeding wounds like the ones shown in the pictures here, it makes no sense putting the fish back in the river, as it’ll most likely just bleed slowly to death, although swimming away “fine” when you release it back to the river.

Better to make the fish a nice dinner then, as you are probably not doing it a favor by releasing it!

That’s what I mean, when I say I don’t like C/R being “obligatory”. It’s clearly important to have a choice in each individual situation.

Hooks for fly-fishing, and water temperature.

My own fishing is a combination of taking a fish home from the river, but also practicing C/R. Seeing as how I only release fish that are hooked light externally anyway, this gives me the freedom to use a traditional double- or treble barbed hook on my flies, typically in size 6 or 8.

If your goal were to practice C/R based fishing in the river primarily, then obviously it would be fine to consider using barbless hooks, and possibly downsizing your double- and treble hooks, or consider using a single hook. You can also choose to move the hook a little further up along the body of the tube fly, thereby increasing the distance between the hook and the wingtip area on the fly. This can also help to reduce the risk of the fish being hooked deeply.

However, you can never fully guarantee that you will not experience hooking a fish so deep that it bleeds, thereby rendering C/R pointless. However, using smaller hook sizes and barbless hooks, as well as placing the hook further up on the fly, will all help reducing the risk of deep hooksets.

As a result of the fight, the fish will accumulate lactic acid in its musculature. Biologists recommend that you do not practice C/R if the water temperature is 18 degrees. Celsius or higher, since the survivability of the fish is heavily reduced by high water temperatures. We must therefore be aware of this factor, when fishing during warmer periods in the summer. If you are in doubt, then measure the water temperature with a thermometer before you start your fishing.

Then Yes. Then it would clearly be better to make a nice dinner out of your catch 🙂

The stock of sea trout in the river, derives from the original gen pool. And the stock comes from a very strong breed indeed. Although the stock in River Karup is not officially labelled as being 100 % “self-sustaining” to full biological extent, there is no doubt that the yearly run of sea trout up the river, comes by the thousands.

That been said, it makes very good sense for us anglers to help the further development of the stock, by not removing every fish we catch in the river throughout the season, thereby depleting the total spawning biomass more than necessary.

Therefore C/R, if done correctly, is something for you to consider, when you visit the River Karup 🙂

“Tight lines” by the river. 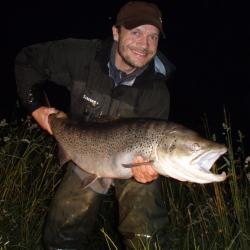 Allan Nørskov Johansen originates from the city of Odense, and he is born 1976. Today Allan resides with his family, close to the river. Allan ”caught” his interest in fishing early on, with brown trout fishing in the small local streams near Odense. Later, many hours along the beautiful coastline of Funen went by, in an ongoing pursuit fly-fishing for the beautiful sea trouts. He visited the River Karup for the first time in the late summer of 1998, and immediately lost his heart to the beautiful countryside, and the river fishing for huge sea trout. Allan prefers a fly rod in pursuit of the beautiful River Karup sea trout, and therefore uses a great deal of time on fly tying as well. The "best experience" by River Karup is often when something unexpectedly and surprising happens on the fishing trip, and the fish suddenly act in a way you did not expect! It creates very memorable experiences. Allan also really enjoys helping others "cracking the code" with fishing tips or flies, so that others may experience catching one of the difficult sea trout from the river. His own best catch from the river is a male fish of 92 cm and 11.0 kg, caught at the end of June 2015. The fish was his second trophy fish from River Karup, surpassing "the magic 10 kg" mark, and gave him a long and memorable fight on his single hand fly rod.

This site uses Akismet to reduce spam. Learn how your comment data is processed.